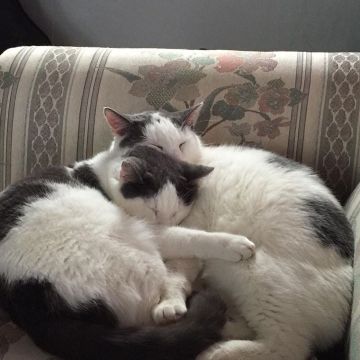 Although they look like twins, Lincoln and Milo were an unlikely match – Lincoln had waited years and years for a home, and Milo had been here for just months. Playful Lincoln was just over looked among all the other kitties in the cat room, and Milo hated being caged but was a bit of a problem child with the other cats so he needed caged when staff wasn’t in the room unfortunately.

We noticed Milo following Lincoln around, and decided to try some match making. We put the two together, and sure enough, their personalities both shined. Lincoln remained playful but became much more loving, and with a fun buddy, Milo wore himself out playing and showed that he could be a nice guy too. An adopter took both of them! She keeps in touch and says she couldn’t be happier with her decision.

Thanks for signing up!